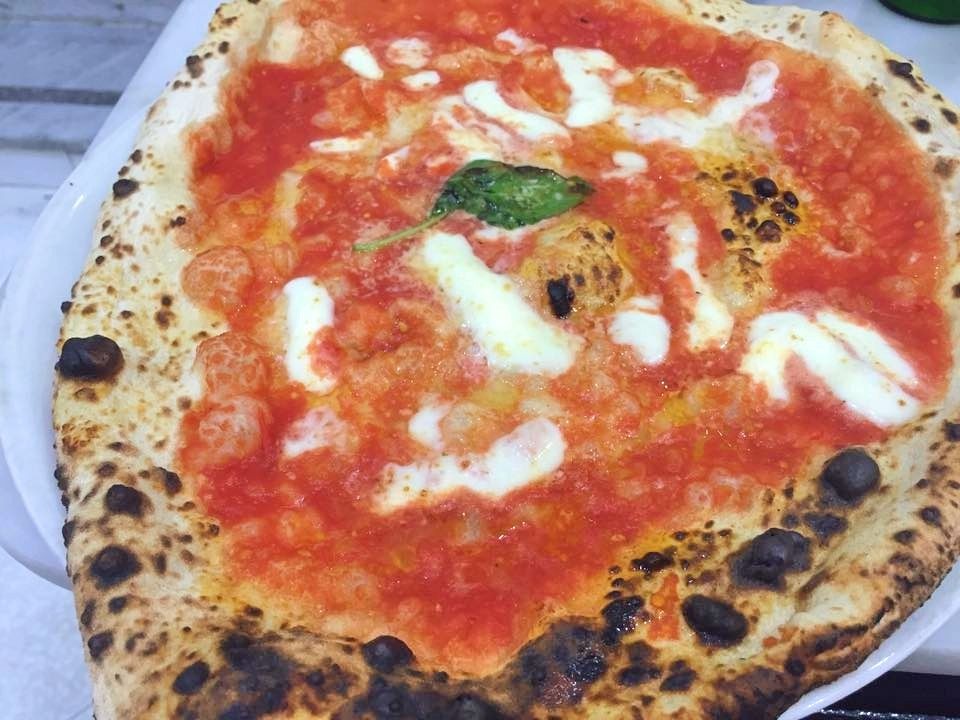 Trying to find the best pizza in Naples can seem like an impossible task. After all, this is the city which gave the world the modern pizza, to the extent that the city’s pizzaioli were awarded UNESCO World Heritage status, and legend has it that the margherita pizza was invented in Naples after a visit from a queen of the same name. So, this is a city with some serious pizza credentials, and you’ll find it and its many varieties just about everywhere.

I did what any modern person does. I Googled it. And the name which kept coming up time after time was Da Michele, or L’Antica Pizzeria Da Michele, to give it its full name.

So, What’s So Special About Da Michele?

Whilst it may not be the oldest pizzeria in Naples – that particular honor is held by Antica Pizzeria Port’Alba – no one can argue against Da Michele having a great pedigree. It was founded in 1870 by Michele Condurro, and its still run by his family; yes, these are people who really know their pizza.

And the pizzeria still holds to the traditions that Michele set. You won’t find any pepperoni or Hawaiian (perish the thought!!) pizza here. Neapolitan purists insist that there are only two true pizzas – the marinara, and the margherita – and that’s all that Da Michele will serve. So if you want to be able to choose from a list of twenty toppings, this isn’t the place for you. But if you want traditional pizza, made the traditional way with the freshest of local ingredients, you’re in luck!

Sounds good! How do I find it?

Luckily for all of us pizza-lovers, Da Michele is pretty easy to find. It’s located in the centre of the city, and not far from Naples’ two main train stations – Centrale and Porta Nolana. From either of these start points, navigate yourself to Piazza Mancini (due west from Centrale, due north from Porta Nolana) and then follow Corso Umberto I until you reach the turnoff into Via Cesare Sersale. You’ll see Da Michele, easily identifiable by its vertical signage, and likely by a queue of hungry folks looking for the best pizza in town.

And if you want to avoid that queue, skip breakfast and get there early. Da Michele works on a ticket system – if there’s no room for your party, you’ll be issued with a numbered ticket and made to wait outside until space is available. It goes without saying that if you’re in a smaller party, you’ll probably get in a lot faster, so if you’re travelling as a family or larger group, getting there early will really pay off.

When you make your way across the hallowed threshold of Da Michele, you’ll probably be surprised by just how un-fancy it is. Given its reputation, and the slice of fame it received from being featured in Eat Pray Love, you were probably expecting something quite flashy, right? Well, nope, and I loved it even more for being quite so basic – it’s authentic pizza in an authentic place. Being a fancy schmancy restaurant would totally go against the ethos of the place – remember, pizza started out as an affordable food for the poor fishermen who were working on the Bay of Naples.

So instead, Da Michele almost has the look of a beer hall – long tables, which you’ll almost undoubtedly be sharing with people you don’t know (yet!), very plain and basic. Drinks are served in white plastic cups. If you’re seated on the aisle, you’ll probably be dodging a few stray elbows of people moving through into the side room, or coming in to pick up a takeaway. But you won’t even notice them, because the main attraction will completely hold your attention.

Yes, the pizza oven is in the room with you. Huge, made of stone with a wood burner beneath it, and a saint’s shrine looking over it, you’ll watch the pizzaioli at work behind the wrought-iron fence which separates it from the customers. After making your pizza choice, you’ll watch the dough being kneaded out, topped, and stretched over a wooden paddle before being swung round into the oven. If you manage to get a space directly opposite the oven, you can watch your pizza cooking, as heat flames dance across the top of the brick roof.

And when your pizza arrives, you won’t notice anything else. Trust me on this.

The dough is so light, it almost falls apart as you draw a knife through it. The tomatoes and cheese are as fresh as it gets, sparkling with a flavour that I don’t think I’ve ever experienced before, thanks to the tomatoes being fresh off the volcanic slopes of Mount Vesuvius. The herbs are delicate but clear. The edges are slightly blackened from the heat of the oven, giving the whole thing an explosion of taste sensations.

I’ve eaten many a fresh pizza in the Naples / Amalfi Coast region. In complete honesty, none of them compare to the one I had at Da Michele. It has to be the best pizza in Naples – though I’m quite willing to sample offerings from the other contenders! But I can’t imagine that many places can compete with the freshness, the flavour, the memories of a good meal which linger far after its been eaten.

By the way, you’ll be pleasantly surprised by the cost – €4 for a normal sized pizza. Yes, you read that right. FOUR EUROS. That’s the same as a couple of coffees!

But I’m Not Planning On Visiting Naples!

Firstly, you should plan on visiting Naples, because it’s a wonderful, underrated city. Aside from the sights in the city itself (check out some of these here and here), the whole region is gorgeous, historic, and relaxing. I’ve visited the Naples area five times now, and it never gets boring. It’s become a second home.

But in the meantime, there’s good news for you! Because Da Michele has expanded beyond the borders of Naples, and now has branches worldwide which hold the same values dear to their hearts. Have a look at Da Michele’s website and see if there’s a pizzeria near you!

Got any other hot tips for good pizza in Naples? I’m always willing to try them out! Let me know in the comments!

Munich Public Transport: A Step-by-Step Guide to the Munich S-Bahn!

One Day in Amsterdam – Travel Tales

Germany and Austria - The 7 Foods You Must Try

Amalfi Coast - The 5 Best Things To Do For Free