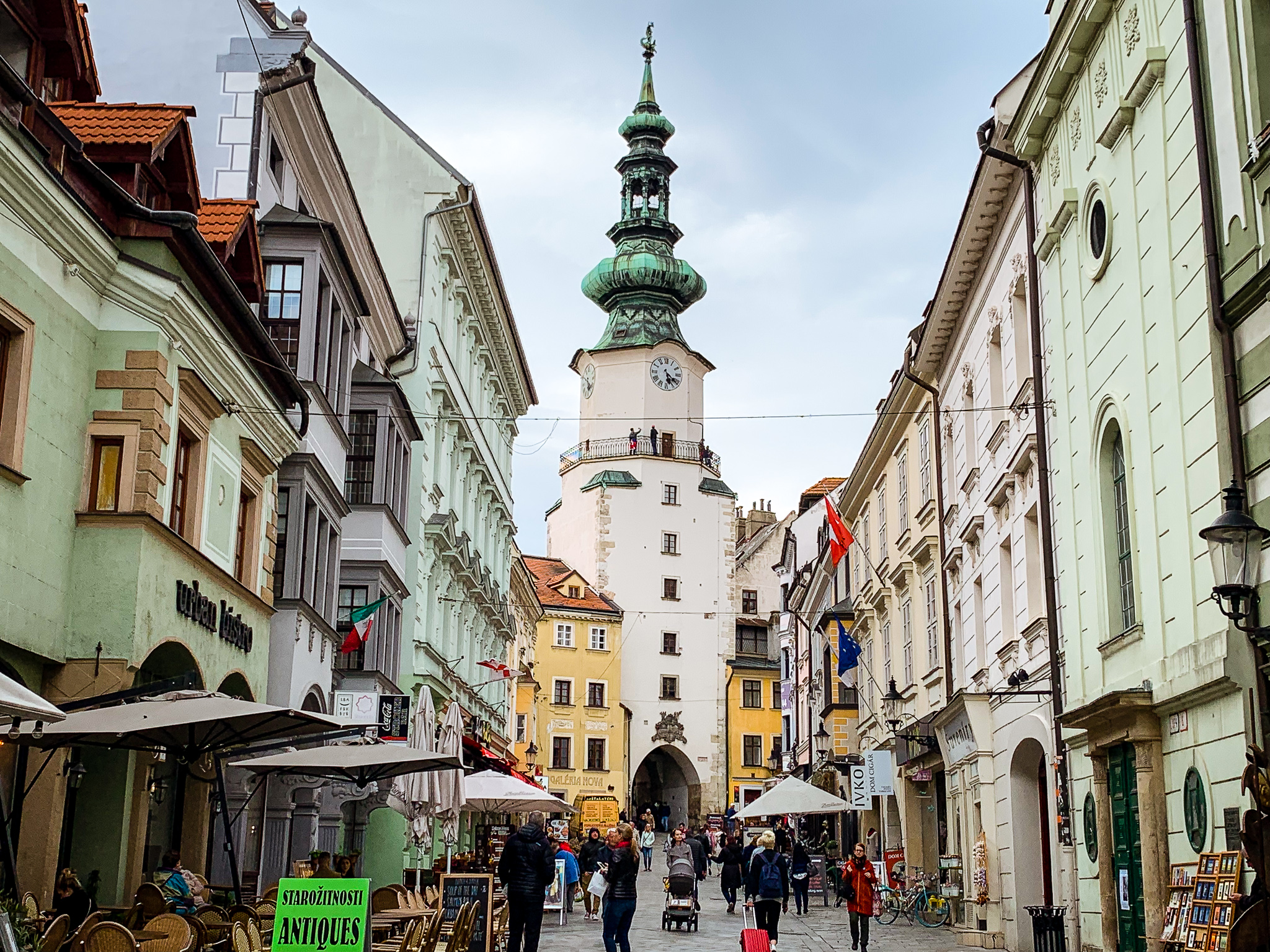 Budapest to Bratislava Train: An Easy (and Awesome!) Day Trip!

All aboard the Budapest to Bratislava train! Choo choo!

Traveling from Budapest to Bratislava was number one on my list of day trips when I visited the Hungarian capital. After all, Slovakia is so nearby, and it’s a beautiful country in its own right. Even though it isn’t the biggest European capital, don’t be fooled into thinking that you’ll get bored; there’s some magnificently quirky things to do in Bratislava! Taking a trip there is a great opportunity, and one that I grabbed with eager, grubby hands.

Buuuut… I’ll admit that I could’ve planned it a LOT better. I don’t drive, so I had to go from Budapest to Bratislava by public transport. Arriving at the train station, I had no idea where to buy a ticket. I didn’t know how much it cost. It only occurred to me once I was on the train that I didn’t actually know for certain if there were trains coming back to Budapest that evening. It was kind of stressful; the kind of stress where you wonder if it’s possible to throw yourself from a speeding train and survive.

By the way! If you’re staying in Budapest and you’re wondering which other day trips are available to you, check out my 3 days in Budapest itinerary – it’s got all the info you need!

So, just in case this isn’t clear, let’s say that you’re at Budapest Nyugati train station at half eight in the morning. The next Budapest to Bratislava train is in ten minutes, at 0840. You’ll arrive in Bratislava at 1102am, having traveled on the EC 130 Bathory service.

As you can see, trains are every hour in the morning, every two hours at midday, and then every hour again in the early evening. The most important thing to remember, if you’re doing a day trip from Budapest to Bratislava, is the times of those return trains. Don’t miss the last train from Bratislava to Budapest at 1957, otherwise you’re going to be finding a hostel or hotel for the night. If you do miss it, use this here doohickey to find yourself a place to stay!

First things first – you need to buy a ticket for the Budapest to Bratislava train. Because let’s face it: you’re not going to get far otherwise.

If you arrive at Budapest Nyugati station on foot, you’ll go through the main doors and find yourself in a rather glorious large train terminus, with the parked trains just chillin’ out in front of you. There’s not an obvious ticket office in sight, so you’ll need to bear off to the right – keep walking alongside the platform, and you’ll find the ticket office located just off platform 13.

However, there’s actually two ticket offices – one for domestic tickets, and one for international travel. It’s pretty clearly signposted, but the staff will direct you to the international one if you do find yourself in the wrong place.

The international ticket office has four desks, and you’ll need to take a numbered ticket from the machine at the side in order to be seen. Trust me, the clerks will not deal with you if you just jump the queue, and walk up to them, as I experienced with some smug satisfaction when someone tried to do it to me. Mwahahaha!

Purchasing the ticket itself is easy: the clerks speak good English, and you can use a credit or debit card to pay for it. You’ll receive something which looks very much like this:

If you’re arriving at Budapest Nyugati on the Metro, finding the international ticket office is even easier. When you get off the Metro train, keep walking along the very long underground tunnel you’ll find yourself in. Get right to the end and come up into the main station, and keep bearing towards the right. You’ll have to go through a couple of doorways, but the international ticket office is right near the outside wall – you’ll spot a sign which is marked as “Information and International Tickets”.

If you can’t find it, simply go through into the main station, then find it by going through the domestic ticket office.

How much does it cost to get from Budapest to Bratislava?

A return ticket will cost you 5688 Hungarian forint – that works out as:

Can’t complain at that, can you?

If you were super-prepared (gold star for you! Wear it with pride!) and bought your tickets online, you can pick them up from one of the large yellow machines marked “VONATJEGY – TRAIN TICKETS”. There’s a fair few of them dotted around the station, so you shouldn’t need to search too hard.

Change the language option to English (much the same as you would for an ATM, or the Metro ticket machines), and you’ll see the option to collect your tickets. Enter your reference code, and you’re done!

If you go back to the main trainshed, you’ll see that there’s a huge departures board, and that’s what we’re going to be using. Fortunately for us, the vast majority of the trains listed are going to to be domestic – most of the international trains from Budapest actually depart from Kelati station, but the Bratislava train is an exception – so your train is going to stick out like a sore thumb.

Once you’ve spotted it, look for the platform number beside it. I have it on good authority from my lovely Hungarian clerk in Budapest’s ticket office that they usually depart from platform 5 or 6. Indeed, my train departed from platform 5, but don’t just take my word for it – always check with the departures board to make sure!

If you’re confused by where some platforms are, it’s because of the station’s layout – think of it as being in a weird U-shape. If you stand right by the main entrance, you’ll see platforms 10 – 13 right in front of you; this is because you’re at the bottom of the U. So if the train is located on platform 5 or 6, you’ll need to go up the left hand side of the U, along platform 10. Turn left at the end, and you’ll see platforms 1 – 9 ahead of you.

Certainly in my experience, the Budapest to Bratislava train is going to be there when you turn up, even if you’re early! Budapest Nyugati is a terminus, so the train just sits there being awesome whilst it’s being cleaned up from its long journey from Prague. I managed to climb on to it forty minutes before it departed, giving me plenty of opportunity to bag a seat.

The train itself is pretty huge, so you’re almost bound to be able to find a free seat. Certainly some are reserved, either with a slip of paper or electronic display showing the name of the person who’s booked it, but otherwise you’ve got a free choice!

Just be sure to sit in the right section – carriages are marked with the number of class. Unless you’ve bought a first class ticket, you’re going to be in second class, so no sneaking into the posh bits.

Traveling from Budapest to Bratislava, and train facilities

Good news here: once you’re in a seat, the train journey is really straightforward, and train facilities are generally good!

Bratislava will be the sixth stop after leaving Budapest Nyugati – if you want to track the stops before it, they’re: Vác, Nagymaros-Visegrád, Szob, Stúrovo, and Nové Zámky. There’s about half an hour of travel between Nové Zámky and Bratislava though, so no need to start gathering belongings and hanging around by doors once you’ve left that station.

Train facilities are pretty much what you’d expect for a long distance train – there’s usually a bar and restaurant carriage, plenty of toilets, and a pleasing amount of USB ports located by the seats. The carriage I was in even had fold out tables with games for kids printed on them, so you probably won’t want for entertainment options!

The journey itself will take about two hours and twenty minutes. My tip is to sit on the left-hand side of the train: you’ll get some lovely views of the Danube, as well as the hilltop castle of Visegrád and the hugely impressive church at Esztergom!

You’ve arrived in Bratislava! Hurrah! You can exit the station, pop down into the Old Town, and enjoy taking in the sights!

On the way back, you’ve got a slightly different setup for getting the train from Bratislava to Budapest. The train station in Bratislava isn’t a terminus, so it’s not going to be there when you arrive at the station (unless you’re leaving it incredibly late, and running along in a sweaty mess).

You’ll need to stand in the main hall, and keep an eye on the departures board to find out which platform the train to Budapest is going to arrive on. When it flashes up, simply move yourself to the platform – and don’t worry if the digital display on the platform doesn’t list anything. From what I saw, it seems that the digital display doesn’t light up with info until a few minutes before the train actually arrives, so as long as you’re where the departure board says you should be, you’re okay!

If you’re departing from platform 1, do bear in mind that platforms 1 and 6 are, rather confusingly, the same thing. This seems to apply to smaller trains, though – small domestic trains don’t take up the whole of the platform, so are assigned platform 6 as an indication that you need to move further up. However, the Budapest train is so long that it’ll take up both ends of the platform, so it won’t matter too much where you’re standing!

Share this guide to the Budapest to Bratislava train!

I hope you’ve enjoyed this guide to getting from Budapest to Bratislava by public transport, and I sincerely hope that it helps you have a fantastic day trip from Budapest to Bratislava! It’s thoroughly worth doing – you may not know much about Bratislava before you leave, but you’ll definitely have a soft spot for it in your heart by the time you leave. It’s a very walkable, pretty city, and perfectly sized for a day trip! You won’t go wrong.

If this has been useful, consider giving it a share using the buttons below! Or if you want it close to hand for when you make the journey, use the below image to pin it to Pinterest – that way, you’ll have it bookmarked exactly when you need it! And I can give you that gold star for awesome planning again!

By the way! This article may contain affiliate links – these sound kinda scary, but actually they don’t incur any extra cost to you at all, should you choose to buy a service they provide. All it does it give some pennies towards the running of this blog. Any extra cash gets used to buy large signs saying “DON’T DO THAT” for the next time I consider jumping off a moving train!

SkyGuru Review: The App That’ll Help You Overcome A Fear Of Flying

How To Get The Best Waterproof Shoes For Travel!

The 22 Must-See Instagrammable Places in Florence!