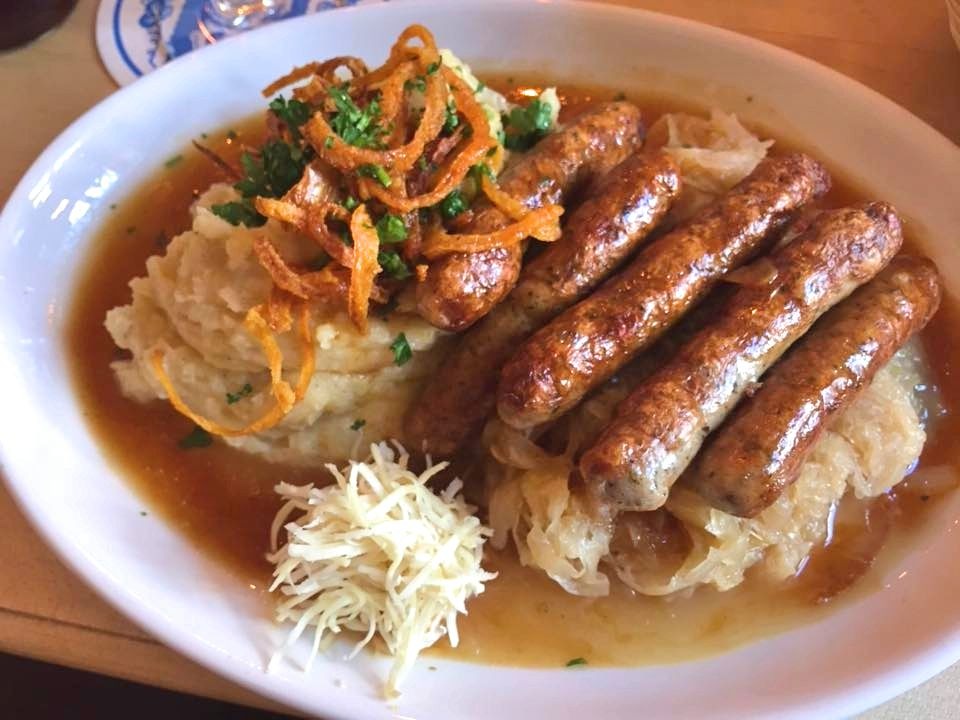 Germany and Austria – The 7 Foods You Must Try

One of my favourite things about visiting other countries is trying out the new foods, falling in love with them, then going through the heartbreak of realizing that nothing you eat back home is ever going to taste good again.  Yes, it’s a double-edged sword, but such is life. But my trip to the Bavaria area of Germany, followed by a trip across the border to Austria, was a revelation. Every single meal I tried was absolutely outstanding, and I fell in love. Hard.

So whether you’re a travelling foodie, or you just want to know what to expect on your trip, read on! Because I’m going to tell you the absolute must-tries for when you visit this outstandingly beautiful part of the world.

You may think you’ve eaten pretzels. Let me assure you – until you’ve had a pretzel from Germany or Austria, you ain’t had a pretzel.

Commonly available in both Germany and Austria, it may seem simple compared to some of the other foods on this list, but it’s the perfect accompaniment to when you’re sipping beer in a beer hall. If you’re in Munich, check out the ones at the historic Hofbrauhaus – the staff will regularly bring them around in baskets for your perusal, brought in fresh from their own bakery. The perfect pretzel is smooth and browned on the outside, and soft and fluffy on the inside, with mouthwatering flecks of salt which will just encourage you to down more beer.

And did I mention that they also make awesome sandwiches? Slice them in half, add some salami and cheese, and you’re sorted.

See also  The Very Best Things To Do In Capri, Italy - The Ultimate Guide!

Non-German speakers may be concerned by the way that the name looks like it should translate as “pig brain”, but fear not – it’s simply Bavarian Roast Pork (with no piggy grey matter in sight).

This was very close to being my favorite thing I ate in Germany, cooked to perfection at Gasthaus Zur Festweise in Munich, which I cannot recommend strongly enough if you’re in the area. The pork should be soft and tender, and fall apart when you poke it with your fork. Swimming in its own sauces, with a bit of crackling perched on top, it’s guaranteed to make your mouth water.  You really get a strong sense of herbs, and mine was served with a delicious potato dumpling which went perfectly with both the gravy and red cabbage accompaniment! Trust me, this is an absolute must for your list of foods to try.

Again, sauerkraut might seem to be one of those foods which you can easily get at home, but you really have to try it in its native land to get the real experience.

Not sure what sauerkraut is? Well, it’s basically a thinly-cut cabbage which is placed in a jar and allowed to ferment. You’d be excused for thinking “eww!” at this point, but don’t let it put you off – the fermentation process gives it an amazing flavor – if you like other pickled foods, then you’ll probably like this. And in Germany, they add bacon to it – who can resist extra bacon?

Again, the dish I tried was at Gasthaus Zur Festwiese, done to perfection with sausages and a peppery mashed potato. It was the first time I’d ever tried sauerkraut – and it was amazing.

Aside from being the most fun-sounding thing on the menu (seriously, there is a strange pleasure in saying the words “wiener schnitzel”), this is found commonly through both Germany and its native Austria. And it is utterly delicious.

If you’ve never come across the humble schnitzel before, it’s basically a pork or veal escalope – a butterfly cut piece of meat fried in breadcrumbs. It’s often served with a slice of lemon, which can be squeezed over the schnitzel to flavor the breadcrumbs, and herbed potatoes. I had an absolutely delicious one at Die Weisse in Salzburg which just about melted in my mouth – also recommended is Alter Fuchs which gives you an absolutely enormous portion! Definite value for money!

C’mon, is there a food in existence more commonly associated with Germany? And with good reason – did you know that Germany has over 40 varieties of these delicious grilling sausages? Well, now you do. And after you’ve tried one in its homeland, you’re probably going to want to sample each and every one of them.

Bratwurst is the quintessential German food, and you’ll be spoiled for choice on where to find them. Outside of restaurants and cafes, you’ll find them for sale at beer halls and on street food stalls, so you really have no excuse for not trying them if you want to. And Austria isn’t missing out on the bratwurst party either: indeed, I sampled one from a street food stall at Augustinerbrau in Salzburg (HIGHLY recommended for a visit), and it was amazing – freshly grilled sausage, with crispy spiced potato wedges and a spicy sauce. Do it.

Well, this wouldn’t be a list of German and Austrian foods without some apple strudel, right?

Originally an Austrian dish (though closely related to Turkish baklava), its name comes from the German word for “whirlpool”. And you’ll receive a whirlpool of flavor upon popping this bad boy into your gullet. Apple, flaky pastry, cinnamon, sugar, and raisins assault the senses. If you really want to enhance the flavor whilst spoiling yourself a little at the same time, have it served with whipped cream or vanilla sauce. Or both, because desserts are Very Serious Business and should always be done properly. Who care about calories anyway.

I experienced a beautiful example at Cafe Glockenspiel in Salzburg, and I highly doubt that anyone makes a better one.

No trip to Austria (and Salzburg is particular) is complete without trying one of these, and you see them everywhere. We even found fridge magnets in the shape of them; that how ubiquitous they are.

A Mozartkugel is a small round chocolate with a pistachio marzipan and nougat center,  neatly packaged in a golden wrapper with a picture of Mozart himself. One taste will have you humming “Rock Me Amadeus”, and you won’t be alone: they’ve been making them since 1890, and their popularity hasn’t waned. They also make a great souvenir to take back home! Check out the full range at Mirabell’s site.

Got any other foods from Germany or Austria which I should sample on my next trip? Let me know in the comments below!

Flying Tips: How To CHOOSE To Have A Great Flight!

Traditional German Food: What to Eat in Munich and Nuremberg!

Travel Rules - And Why You Should Ignore Them