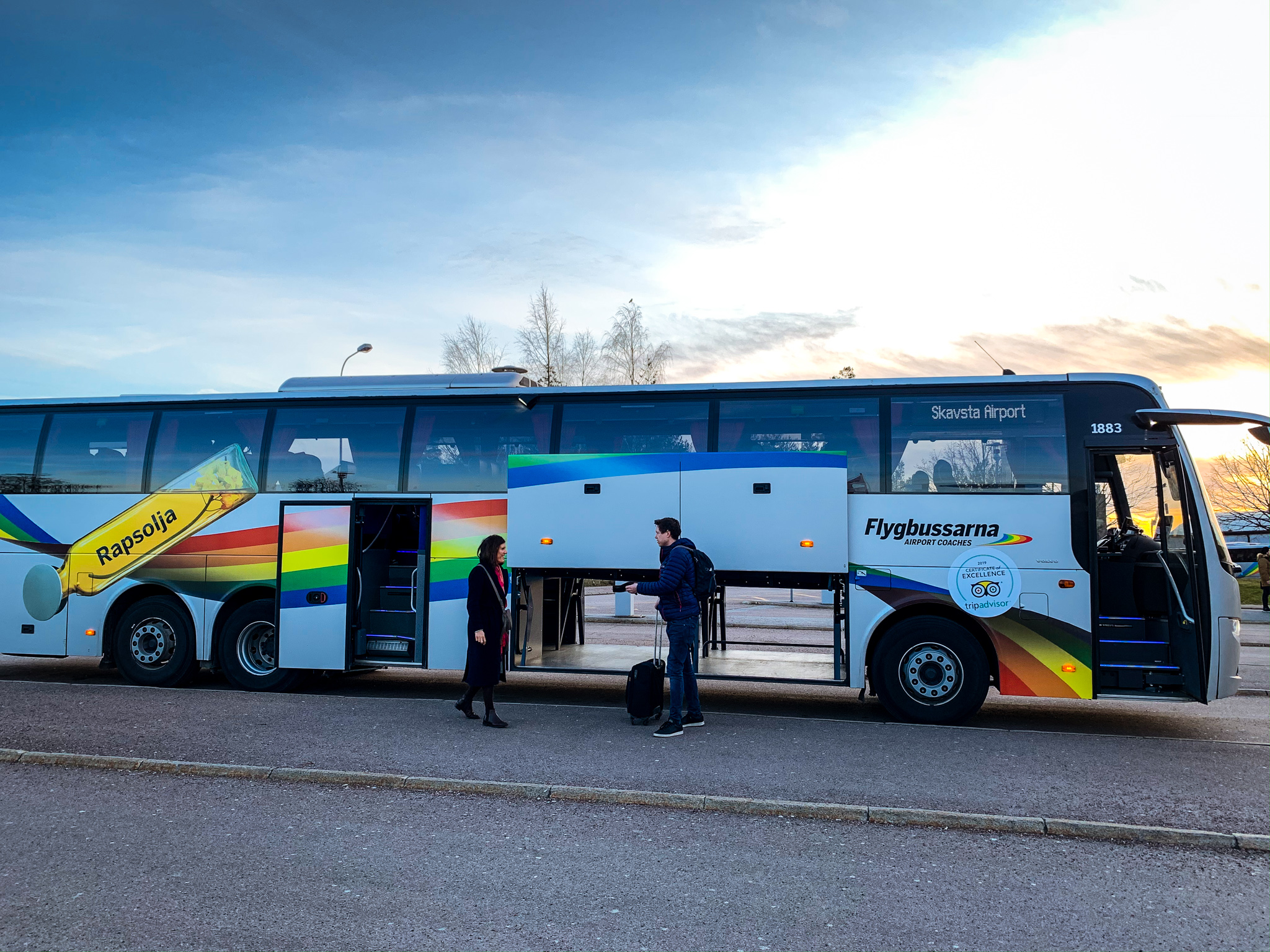 I love Gothenburg. It’s a young, cool, eco-conscious city which is authentic and friendly. Yay to all those things! But if you’re just arriving in the city for the first time, the question of how to go from Gothenburg airport to city center can be a puzzling one.

After all, if this is the first time you’ve decided to travel to this neck of the woods, you’re probably not going to know too much about Gothenburg. It’s not a place you hear that much about, not like its rival city of Stockholm. Do they even have a system for tourists to get into the city centre? Or do they assume that you’re all renting cars, leaving you abandoned and alone at the airport?

Fear not! Not only does Gothenburg have a fantastic public transport system, which means you’ll be able to whizz around town with gleeful abandon during your stay, but there’s a ridiculously easy way to go from Gothenburg airport to city center. Seriously. Once you used it, you’ll love it with all your heart.

Let’s take a look at all your options, before I let you in on the secret of effortless Gothenburg travel!

Doing a tour of Sweden? Check out my guide to visiting Stockholm in winter!

How do I get from Gothenburg airport to city center?

If you’re arriving at Gothenburg Landvetter Airport, and you don’t want to make life super-easy for yourself (whyyyyy?), there’s a couple of other forms of transport you can check out.

Generally,  taking a cab in Sweden isn’t a great idea. Not because of any safety concerns (this is the famously-safe Sweden, after all), but because of the cost. A taxi ride will set you back in the region of 450 SEK, which equates to roughly $47. Ouchies. It may be fast, but it’s definitely not an option for budget travelers, or anyone who wants to keep costs down. If you’re still keen, you can book a taxi from Gothenburg Airport to the city center (or elsewhere) at Taxi2Airport.

For those of you wanting a car to go out and explore the rest of the area, four car hire companies operate out of Gothenburg Airport. These include Avis, Budget, Thrifty and Hertz, and prices vary depending on length of rental and type of car (if you’re visiting Gothenburg in winter, remember that you’re probably not going to want a convertible…). Check out this nifty page at Booking.com for a comparison, and links to book!

Want the possibility of getting some very cheap bus tickets to Gothenburg city center? Then you should probably have a look at Flixbus! The coach company, which operates all the way through Europe, runs services from Gothenburg airport to city center, and there’s the possibility to get a real bargain. The downside? Their services are much less frequent than my favourite option (keep reading for that!), and if there’s a few people on your flight, or other arriving flights, with the same idea… you might be waiting a while.

The comfy interior of the Flygbussarna.

Flygbussarna: The easiest way to get to Gothenburg from GOT airport

Here it is: the best way to get to Gothenburg city centre from the airport. And its name is Flygbussarna (bless you).

It may be a bit tricky for the English-speaking tongue to wrap itself around, but Flygbussarna is an awesome service which operates from all the major airports in Sweden. Gothenburg airport, Arlanda airport in Stockholm… basically any large city airport in the country. They’re comfortable, well-organised coaches which offer regular services – often departing every fifteen minutes – on which you can chill out, charge your phone, and be deposited in the city centre. It’s as easy as that.

The service from Gothburg Airport to city centre is particularly nifty, as it only takes 25 minutes to get into town, and there’s a few different stops, meaning that you can potentially be dropped off closer to your hotel. I’ll outline the stops later on, but this is such a great idea – my hotel wasn’t particularly close to the central bus station in Gothenburg, so being able to stop the bus nearer to my destination was a lifesaver, especially as it was late at night.

Getting a ticket for the Flygbussarna is also super-easy. You can buy them on the bus – make sure you have a credit or debit card, as Sweden is almost a cashless society – but to make travel completely stress-free, purchase a ticket before you even leave home.

I’ve found that  the simplest way to do it is to have a laptop and a smartphone handy. Download the Flygbussarna app, then hop on your laptop. Create an account, and search for and purchase your tickets (don’t worry about what time of day you’ll be arriving – your ticket will be valid for three months after you purchase it. As long as that covers your dates, you’re good!). You’ll be sent an email as confirmation, which you can print out and use as a ticket.

Alternatively, open that app, and sign in. Tap the “Tickets” tab on the bottom of the screen, and you’ll see that your ticket is there, shining proudly. When you get on the bus, all you’ll have to do is scan the barcode, and take your seat!

Gothenburg Airport. If you get to this point, you’ve come too far; turn right out of the building.

Where to catch the Flygbussarna at Gothenburg Landvetter Airport

You’ve discovered the best way of going from Gothenburg Airport to city center. Hurrah! But where the heck do you go to catch it?

You’ll be relieved to hear that it’s all rather simple. Even though Gothenburg Airport is the second-biggest in Sweden, it’s all remarkably chilled-out and non-stressy. Once you get through security checks, you’ll pick up any luggage from the incredibly-efficient baggage handlers (when I got there, my bag was already waiting for me. How often does that happen?).

Got your bags? Good. Follow the marked path through the doors, and you’ll find yourself in Arrivals. Rather helpfully, there’s even screens which display when the next Flygbussarna departs (keep an eye out for the rainbow livery), but you want to head straight on, then take a right turn out of the terminal. If you’ve followed the signs correctly, you’ll find yourself at the bus stop!

The chances are that there’ll be a bus waiting there to whisk you to fair Gothenburg city, but if not, there’s a handy display screen which tells you when to expect the next departure. Scan your ticket, and you’re off. Going from Gothenburg Airport to city center really is as easy as that!

The eagle-eyed will notice that this is a coach to Stockholm Skavsta Airport (from a previous trip of mine!), but the Gothenburg Airport to city center coach looks exactly the same.

Once you’re on the Flygbussarna, where do you get off? Are you going to end up on some dark street corner, shivering and lost?

Nah. Swedes are nice folk; they ain’t going to do that to you. If you do the full journey, the bus will take you from Landvetter Airport to the central station in the city centre, AKA the Nils Ericson terminal. This is ideal if you’re staying in the heart of the city (there’s a number of hotels near the station), or if you’re heading on to the train for an onward journey – and there’s a good information booth if you are.

If your hotel isn’t located near the station, there’s a few other bus stops where you can request the Flygbussarna to halt, using the Stop buttons on board. These include the Liseberg amusement park, Berzeliigatan, and Kungsportplatsen.

If you haven’t booked a hotel in Gothenburg yet, I’ve got an awesome tip for you – check out the Scandic Rubinen. It’s just around the corner from the Berzeliigatan stop and in an incredibly well-equipped area – it’s on the same block as a massive Coop supermarket, a pharmacy, a 7-Eleven, and a McDonalds. You may not need the food options though, as the choice of breakfast options is literally gigantic!!

Share this guide on getting to Gothenburg city centre!

I hope this information about going from Gothenburg Airport to city center has been useful! If so, how about giving it a share? Simply tap those lovely buttons on the side, and you can share it to your favourite social media network, and impress all your followers forevermore.

If you’re super-smart, use the below images by pinning them to Pinterest! That way, this article gets a share (yay!), but you get a bookmark back to this page for when you need it! Perfect, right?

Psst! This article on going from Gothenburg airport to city center contains affiliate links! These incur zero extra cost to you, should you choose to purchase the service provided, but gives this blog a bit of commission, which goes towards running costs! Any extra money earned is spent on purchasing hot dogs from the newsagent in Landvetter Airport. Trust me, they’re awesome.

23 Things You Should Know Before Visiting the UK

The Very Best Things To Do In Capri, Italy – The Ultimate Guide!