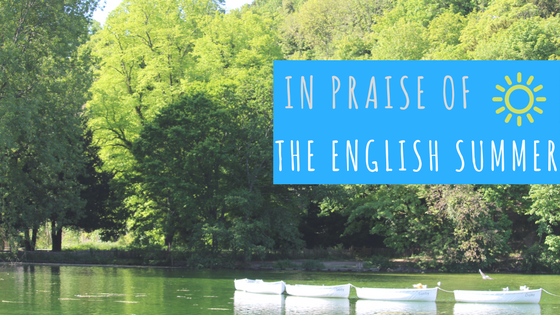 In Praise of the English Summer

Some say it is a myth. Some say that it slips in, unseen during the night, stealing in whilst backs are turned and children sleep. Some say that it goes just as quickly, like a shadow in the darkness, so quickly that you barely knew it was there.

Britain really does get a summertime.

Now, as I write, the summer here in England is living up to the stereotype – grey clouds look pregnant with rain, mere days after thunderstorms leaped happily across the hills. I’m wearing warm, fluffy socks, and a long woolly cardigan, and happily thinking back to the summers of my childhood. I’d spend endless days in the garden, playing in a tent on our lawn, smelling the scent of barbecues, and hearing the distant slap of a jet ski hitting waves down on the beach. But just a few weeks ago, we had summer. It was as warm and glorious as my memories.

The English summer doesn’t last long – some years, it barely arrives at all – but when you get it, there surely can’t be many places that are more pleasant. It never crosses the line into becoming too hot; news articles reporting deaths from heatwaves in other (more consistently lovely) parts of the world are read by the natives and marked with a surprised exclamation. The fields, trees, and hedgerows, kept plentifully watered throughout the year, burst in an explosion of green foliage. You can smell sun hitting the leaves, the scent of chlorophyll on a gentle breeze. Pub gardens become a ridiculously relaxing place, sheltered and sunny, skin gently tanning as you while away a few hours chatting with friends, stars appearing in a velvet sky even as the landlord turns on the outside fairy lights. When you get the inevitable shower of summer rain, you breathe in petrichor and sigh happily.

I went out and about during this fabled time of sunshine, determined to make the most of it, and took my iPhone with me. However, I’m an idiot, so most of the photos are in portrait. Lesson learned.

London is a funny one in the summer. For the rest of the year, London ambiance is defined by the weather – rain and gloom are usually negatives, but London is somehow enhanced by it. Autumn is London’s finest season; rainwater trickling between the cobblestones on a narrow street, the history brought to life by the grittiness of the current day, a warm fire crackling in a cozy room as the night draw in. However, a hot summer’s day in London brings a new side out of the city, a side which loves to be in the open air and enjoying the many leafy parks, the pavement cafes, and outside events. The population spills out into the streets and markets, and doesn’t even care that the Underground suddenly becomes a bit unbearable.

If you visit in the summer, be sure to make the most of London’s outdoors. Walks along the banks of the Thames, visits to the many open air markets, walking through the parklands, and experiencing events such as the Notting Hill Carnival and London Pride. Take in the views from the London Eye, or go on a riverboat tour. And if it rains, you have some of the world’s best museums and galleries  to keep you occupied.

Second stop, Arundel in West Sussex. Often criminally overlooked by guides, it’s a small town between Brighton and Portsmouth, not far from the south coast. But what it lacks in size, it makes up for in history.

See also  Travel Rules - And Why You Should Ignore Them

Arundel Castle dominates the landscape, the town nestled beneath it. Purchasing a ticket to go inside allows you into a different world, from the well-stocked armoury which bristles with swords and muskets (and one particularly huge broadsword), from the elegantly furnished royal rooms, to the ancient bailey and tiny, dark dungeon. The history doesn’t stop there; in the town itself are the remains of a friary, scenic in its disrepair, and the French-Gothic Arundel Cathedral. Walk along the River Arun, watching swans floating by, and take in the countryside.

Enjoy the small shops – antiques and books are a specialty, and the covered shopping arcades are elegant and fun to explore, with quirky specialist shops. Need a shop full of carved walking sticks? Arundel has one.

And finally, a canal ten minutes from my front door. Because sometimes, when it’s summer in England, it’s just nice to go out and see what you can find. And in this case, I found loads and loads of blackberries growing underneath a gentle sun. Swifts flew though the air, taking insects off the surface of the water, and harassing a hawk which flew too near to their barn. A canalboat chugged past, the driver waving. Dragonflies buzzed around the reeds.

And if you were wondering, yes, the blackberries were delicious.

John Ruskin said that “there really is no such thing as bad weather; only different kinds of good weather.” He was right. Enjoy England whichever time of the year you visit – we’re well prepared for rainy days – but if you’re lucky, you may get a glimpse of that rare beast, the English summer.

See also  Airport Anxiety: 12 Life-Changing Tips On How to Beat It!

Do you have a favourite time of year? Is there a particular country which suits a particular season? Share your tips in the comments!

Sorrento on a Budget: How to Save Money and Spend Less!

Travel Tips #1: Before You Go

Blogs You Should Check Out: Part Two