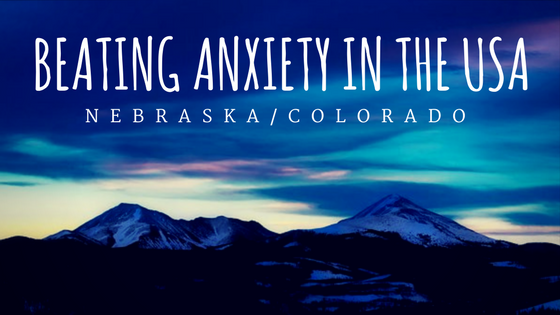 Beating Anxiety In The USA: Nebraska/Colorado

Following my Fail Tale a couple of weeks ago detailing my cancellation of the trip to the USA costing £1500 (I’m still counting and lamenting over every penny, as a kind of self-flagellation), I thought it was time for a Tale of Win. The times when I’ve beaten the nerves and conviction that I’m flying to my death. The proof that I can do it again, that anyone with anxiety can travel.

To date, this was my longest journey: a distance of just over 4000 miles. My friend had invited me over for a two week stay, to explore America, take in a baseball game, and experience all the things I couldn’t do at home. My tickets were booked, I was excited, I was all ready for my first solo flight – to Omaha.

Now, I’m in the UK, but I’m aware some some American readers are probably thinking “lolwhut, Omaha??” at this point. I know of Nebraska’s reputation as being a boring procession of cornfields. Indeed, if you Google for lists of “Most Useless States in the USA”, Nebraska earns itself a coveted spot at number three. I-80 in Nebraska has gloriously been awarded the title of “Most Boring Interstate”.

But I’m very fond of Nebraska. To me, nothing was boring; it was familiar but completely different to what I was used to. I will always maintain that there is nowhere in the world that is boring; you can only make it boring for yourself by not seeking out the good – discovering new people, new foods, new experiences. As I’ve said before (and will say again), everywhere is new and exotic to someone else; I experienced so many things that were completely new and mind-blowing to me during that trip. Nowhere is boring.

But I’m getting ahead of myself. First, I had to get there.

I’d flown a few times by that point, all on short flights through Europe with my family. I didn’t like it. I didn’t like it at all. And this time, I was doing a flight to Cincinnati completely by myself. The thought filled me with dread, and I grew increasingly nervous about the flight and whether I’d be okay. I managed to put off the worries until the day I was due to depart; having my friend on the other end of the flight helped. She encouraged me and reminded me about all the fun stuff we were going to do once I got there, and I learnt a valuable travel anxiety lesson from that: focus on the trip, not the flight.

On the day of departure, I was fine on the train to the airport, though I seemed to get quieter and quieter the closer I got. I was still putting the worries out of my mind at this point. But then, when I reached the airport security gate, the anxiety all spilled out at once.

I’ve written about this here , and it still is one of the biggest sudden mental ‘freezes’ that I’ve ever had. I suddenly couldn’t bear the thought of leaving, I was tearful and fearful, I felt like a team of snorting, pissed-off horses couldn’t have dragged me through that gate. And the advice that I wrote in that post is probably one of the best tips that I can give anyone with travel anxiety: the pure power of walking.  That was another valuable travel lesson: forward motion keeps you going forwards.

I made it through the gate. And I was suddenly fine.

My preparation work, hours spent researching airport maps and planes on the internet, suddenly paid off, and I knew exactly where I had to go and what I had to do. I took my place on a seat in the gate, adopted the smug look of “I’m going on a long journey”, and aimed it at the people going on a short haul in the gate next door (this was kind of awful; I was young and excitable. Sorry, people on the short haul). I got on the plane with a few apprehensive nerves, but no anxiety. And I had the entire back row of plane seats all to myself, so I promptly raised all the arm rests, laid myself down, and slept for half of the flight whilst flight attendants left food for me on the tray table. And it was wonderful.

I specifically two remember two things about Cincinnati airport – firstly, seeing an American flag with a little gold eagle on the top as I went through passport control, and thinking to myself, “wow, I really did it”. And secondly, being so filled with a sense of achievement, a sense of adventure, and a sense of having beaten my own worries and anxiety, that I went positively giddy. I beamed with happiness at the suspicious young security guy who checked my passport, which made him even more suspicious. I practically danced around Cincinnati Airport during my four hour layover; I went in every shop three times. I chatted happily to a guy in a shop selling NFL gear and had my first taste of American friendliness and openness to strangers, which I loved. I didn’t even mind that the toilet doors had weird gaps in them, and that the auto sensor on the flush kept going off. I was high on life.

The connecting flight to Omaha was a breeze. It was a small plane, which I’d previously been terrified of. Now it was a cozy little transportation, with a flight attendant who gave me extra cookies because she liked my accent. I arrived in Omaha and met my friend with no problems. She drove me around town and pointed out the sights; I was exhausted but so, so happy. I went to sleep that night in the middle of a thunderstorm so fierce that shook the house; I merely shrugged and happily snuggled down.

See also  Prague Souvenirs: 11 Awesome Gifts, and Where to Find Them

I remember waking up the next morning, and leaning on the windowsill to look out at a perfectly calm, sunny day. There was a kid on a bicycle delivering huge, chunky newspapers. It was a perfect tableau of a stereotypical suburban scene from an American movie, a real-life version of something that I’d seen portrayed hundreds of times. And now I was living it, I was really there. I think that moment was one of the times when I’ve felt most like the person that I want to be: a confident world traveller, experiencing the day-to-day life of people in other countries. I reflected on how close I’d come to not making the trip at all, and it felt like I’d averted a disaster.

I throughly enjoyed exploring Omaha and Nebraska. Everything was so relaxed and friendly there, colours seemed brighter and more vivid than at home. I discovered the old town, with its western feel; something I’d never seen before unless it was in a movie or a theme park. The Henry Doorly Zoo was outstanding, and I discovered a taste for hickory-smoked burgers and original-flavour Fritos (neither of which are readily available in England, and if offered, would happily make me vote to induct Britain as the 51st state). I visited wildlife sanctuaries and saw wolves and bison. We drove to the state capital of Lincoln and bought University of Nebraska goodies.

And then we decided it was time for the all-American activity of a road trip. Denver, gateway to the Rocky Mountains. I’d never seen a mountain before, let alone been in the middle of some. We loaded up the Chevy with original-flavour Fritos, selected two dozen CDs, and hit the road.

Bloody hell, I love an American road trip, and I can’t confirm if I-80 is the most boring interstate or not, because we completely ignored it and took the scenic route. We went through tiny towns with a population of 12, zoomed past cornfields, went through the Sandhills, stopped at state parks and took pictures of the sunset. I saw wagon tracks embedded in the ground which had been there since they were used as part of the Oregon Trail. I visited small towns with handsome town squares, visited a soda fountain, discovered tiny diners in the middle of nowhere, stayed at motels. I’d never done anything like this before. One of my strongest memories is of a thunderstorm rolling in, forked lightning shooting down, whilst we drove along the edge of the cloud like we were surfing a storm.

I also remember the first time I saw the Rocky Mountains rising up ahead of us – thinking at first that they were clouds in the sky, before realising that it was snow-capped mountains, emerging up behind Denver to kiss the blue.

Our second day was spent in the Rocky Mountains, exploring some of the towns in the area, and driving up Mount Evans. My friend had told me of this, having been previously unaware that it was even possible to drive up a mountain, and I admit that when I’d been considering it whilst at home, the concept had rather scared me. It was a one car-width track, I was informed. But what if there’s a car coming from the opposite direction? I wondered to myself. Apprehension crept in; images of cars plunging off the sides of roads, exploding A-Team style.

It was amazing. I fell in love with the Rocky Mountains instantly. To this day, it is one place that I’d go back to and visit again with zero hesitation; I loved the clear creeks and alpine scent, lakes that were partly frozen and partly crystal clear. My friend and I threw snowballs at each other in June, creased up laughing, then creased up from lack of oxygen. We drove right to the very summit, found the brass marker that told us that we were 4348 feet up. I looked out towards the continental divide, and felt strangely peaceful.

I think that in my mind, it has become one of my ‘happy places’ – standing on top of a mountain, knowing that I may not have climbed it in a physical sense, but that I’d climbed it mentally. I didn’t think I’d make it to the top of that mountain. I didn’t ever really believe that I’d even make it to the country that the mountain was located in. I knew that my anxiety was possibly something that couldn’t be beaten forever, but it was possible to grab victories from it, make it shrink until it was a mere annoyance rather than something that would prevent me from being the kind of person I wanted to be.

A storm rolled into Denver that night, as we watched the Colorado Rockies take on the Pittsburgh Pirates, baseball hot dog in hand. The storms seemed to be following me around for those two weeks, but I didn’t mind; I’ve always found lightning storms to be quite cleansing. And that night, it felt like my worries could always be washed away, that I could go anywhere I wanted on this vast, beautiful planet. Everywhere was in reach.

And I still believe that.

Paris Landmarks… And Why You NEED To See Them!

7 Awesome Things To Do In Munich In One Day!

Blogs You Should Check Out: Part Two