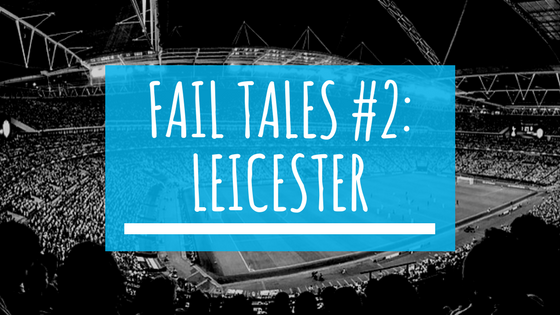 Time for another Fail Tale, when I recount a time that I have completely failed at travelling in order to inspire you (and myself) not to make the same mistake again! Though this one is slightly less travel, and a whole bunch more of anxiety.

Let’s establish one thing straight away – Leicester is not your usual travel destination. The 13th biggest city in the UK, it is mostly known for being one of the most multicultural cities in the country, and for being the final resting place of King Richard III (dispatched in battle in 1485) after he was discovered buried, somewhat ingloriously, underneath a city centre car park. Despite both of these wonderful things, it’s general reputation is that of a slightly bland, slightly unloved, run-of-the-mill Midlands city. However, in the summer of 2016, I had ulterior motives for wanting to go there.

Yes, football. Or soccer, depending on what part of the world you’re in.

I’ve supported Leicester City Football Club for over twenty years, despite living 213 miles away. My dad loves football, my brother loves football. Girls football wasn’t really encouraged at my school, so I’d barely ever kicked a ball, but at home I was surrounded by it. My dad and brother both supported London teams, and although it probably would’ve been easier for me to follow suit, I instead plumped for an unfashionable team from an unfashionable city. The reason for this was simple: their nickname was (and is) The Foxes. And I really liked foxes.

During my teenage years and early twenties, it was easy to support from a distance. I attended away games, usually when they played in London, as tickets were hard to get for the home games due to a small stadium capacity (a problem that still persists). Leicester did their usual thing of being a ‘yo-yo club’ – one that gets relegated from the top league one year, goes back up the next year, goes back down again, has a particularly awful drop down even further, goes back up, goes back up to the top league, etc. This is standard for Leicester; the media at large barely notices. The fans will have ‘avoid relegation’ as their main target for the season.

The 2014/15 season was the year of The Great Escape, and to that point, the biggest miracle the club had ever seen, unless you count signing Roberto Mancini one time (seriously, how?). Leicester started the season in abysmal form, winning only four of their first 29 games. At Christmas, they were dead last in the table. Teams who are dead last at Christmas usually remain dead. But they turned it around. They went on a late run, somehow winning six of their last eight games. They finished 14th in the table, avoiding the dreaded relegation zone. People went ‘hmm’, and tipped them for relegation next season.

Before the new season started, the club parted company with the manager, the grumpy yet effective Nigel Pearson, and replaced him with Claudio Ranieri. An elderly Italian, kindly, funny, and the nonno you never had, Ranieri had two nicknames in football. One was ‘The Tinkerman’, a reference to his habit at previous clubs of constantly changing the team line-up, often to its detriment. The other, after a spectacularly unsuccessful stint as manager of the Greek national side, which saw a humiliating defeat by the Faroe Islands which got him sacked, was the somewhat harsh ‘Clownio’. The Guardian newspaper observed, “If Leicester wanted someone nice, they’ve got him. If they wanted someone to keep them in the Premier League, then they may have gone for the wrong guy.”

Relegation seemed a certainty. Ranieri was top of the betting to become the first manager sacked in the new season. Leicester’s odds of winning the title, which was a laughable concept, were 5000-1.

Some other odds from that year, which were considered more likely:

Simon Cowell to be the next Prime Minister: 500-1

The Loch Ness Monster being discovered: 500-1

You get the point.

The season started well with a win against Sunderland on 8th August. Remarkably, they didn’t see their first defeat until 26th September to Arsenal, one of the ‘big five’ teams in the league. Even more remarkably, their next defeat wasn’t until 26th December. They racked up win after win, even the ‘big five’ teams of Manchester United and Chelsea unable to defeat them. They went on an absolute win rampage, and I remember being completely amazed, and wondering when the wheels would fall off. Striker Jamie Vardy broke the record for the amount of goals scored in consecutive games. Leicester were not only winning, but top of the table in the Premier League, the top division in English football and considered one of the best leagues in the world. This year, they were top of the table at Christmas. Usually, the team at the top of the table at Christmas wins the league.

See also  About To Fly

Leicester suffered one more defeat to Arsenal on Valentine’s Day. Only Arsenal and Liverpool had managed to beat them – every other game was won or drawn, but mostly won. Their only competitor was Tottenham Hotspur, who managed to hang on but could not afford to lose or draw any games. And then, on 2nd May, Tottenham drew with their London rivals Chelsea.

The impossible had actually happened.

I cried with happiness. Bookmakers cried painful tears wondering why they’d let people bet at odds of 5000-1. Football fans across the world congratulated Leicester City on their footballing miracle, the greatest sports story ever seen. It meant anyone could win, with a bit of team spirit and hard work. You didn’t have to be a big club; you didn’t have to buy the most expensive players. The rule book was ripped up. Ranieri acquired the nickname ‘King Claudio’.

So, you’re sitting there thinking, ‘well this is nice and everything, but how does this relate to anxiety?’

Quite simply, the city of Leicester went mad celebrating their football team’s winning season. People literally danced in the streets. I watched from 213 miles away, wishing I was there. And there was a way I could be.

The tradition, after a team wins a title or a cup competition, is to hire an open-top bus and parade the team and trophy through the streets. In this case, it would be Leicester hosting the parade, the easily-accessible-by-public-transport city of Leicester. Rumour had it that the band Kasabian, who I like rather a lot, would be playing a surprise gig at the end of the parade, being Leicester City fans themselves.

I couldn’t do it.

I regret it even now. Just writing this has brought back the feelings: the nervousness, the fear of missing out, and the frustration. If you’ve made it this far through this post (I know it’s rather different; I’ll be back to travel in my next post!), I urge you to never, never let go of opportunities which will mean so much to you. If it’s an event like this, go. If it’s a trip abroad, go. Even if it’s meeting your friend for a coffee, go. Don’t miss out, always move forward.

And because I couldn’t do it in person:

Travel Tips #1: Before You Go