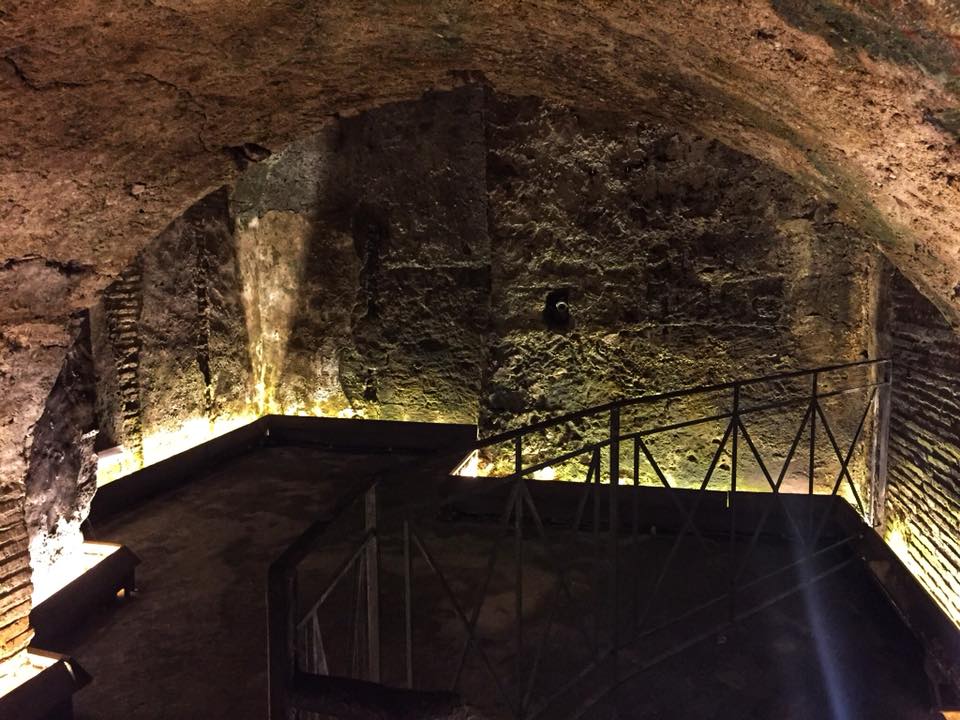 Let’s face it: who doesn’t want to get their Lara Croft/Indiana Jones vibe on, and go exploring forty feet below the surface of a city? No-one, that’s who. But that’s exactly what Napoli Sotterranea offers you, in a guided tour which is full of history, excitement, and a good deal of charm. You’ll see places which date from when the city was still Greek. You will view flowers growing forty-feet down. You’ll climb through tiny crevices, illuminated only by a candle held in your sweaty, excited paws.

But I’m getting ahead of myself! Before we get to the exciting stuff, here’s the logistics.

How To Find Napoli Sotterranea

You shouldn’t have too much trouble finding Napoli Sotterranea; it’s right in the historic center of Naples, and you’re bound to go near it when you’re exploring the city. Located on Via dei Tribunali, it’s easy to find no matter which direction you’re coming from.

If arriving from either Napoli Centrale station or Porta Nolana station, simply head towards the city centre along  Corso Umberto I until you reach Via Duomo – head up there until you reach the intersection with Via dei Tribunali, then turn left.

Similarly, if you’re arriving from the nearest station (Cavour), you want to head south along Via Duomo until you reach the same intersection, then turn right.

If you’re arriving from the ferry terminal, walk along the busy road you’re currently on (Via Nuova Marina) until you spot Via Porta di Massa on the other side of the road. Follow this road, and cross over Corso Umberto I, and follow the road directly opposite you (Via Mezzocannone) until you reach Via dei Tribunali; the general hospital will be straight in front of you. Turn right here.

See also  Airport Anxiety: 12 Life-Changing Tips On How to Beat It!

In either case, keep walking along until you spot the Pizzeria I Decumani (which does a lovely pizza fritta if you’re in the mood); Napoli Sotterranea is located just up a path at the right-hand side of the pizzeria. You won’t miss it – watch out for the flags, and the rather eye-catching entrance.

Napoli Sotterranea is open every day from 10am to 6pm. Guided tours in English run every two hours at 10am, 12pm, 2pm, 4pm, and 6pm, and you don’t need a reservation; just turn up in good time, and you can buy your tickets at the office. Tours are mandatory – trust me, you wouldn’t want to go through the maze of catacombs without a guide!

Tours in Italian run every hour on the hour; if you’d like to enquire about a tour in another language, give them an email at info@napolisotterranea.org

Prices are €10 for adults, and €8 for reduced tickets.

As I mentioned above, getting to Napoli Sotterranea comfortably before your intended tour time is a good tip – although each tour can take roughly about forty to fifty people, you want to make sure you avoid the disappointment of missing out (especially if you’re in a larger group). You’ll start off by queuing outside, until the tour starts and you can purchase your tickets.

As for the tour itself, you start by descending a darkened staircase – note that there’s quite a lot of steps throughout the experience, so that might be something to consider if you’re travelling with anyone who’s going to have difficulties. The first room you come to is a modern holding room – you’ll be waiting for the rest of the group to join you, and it also helps to get your eyes adjusted to the dimness. If you’re worried about the dark – and as an anxiety sufferer, I worried about pretty much everything before I took the tour, including seismic activity and collapse (spoiler: that won’t happen to you either) – I can reassure you that it really isn’t super-dark down there. It’s well-illuminated without losing the atmosphere, so you certainly won’t be stumbling around blindly.

One thing I will mention is for those who may be claustrophobic – on the whole, the passages you’ll be going through are pretty spacious and open – they used to be aqueducts and shelters, after all – but the segment of the tour which is illuminated by candlelight is pretty enclosed, and depending on how severe your claustrophobia is, you might have a bit of a struggle. But good news: this part of the tour is actually optional. If you get this far and don’t like the look of the enclosed tunnels, you can skip them; the tunnels loop around, so all you’ll have to do is wait by the entrance for your group to return. The enclosed tunnels take around fifteen minutes, so you won’t be waiting there that long.

The enclosed tunnels are pretty darn enclosed, though – I have a slender build (despite all the pasta and pizza…) and there were a few spots that I was having to squeeze through sideways, so you may want to bear that into consideration. And it’s definitely not a good idea to take any large bags through there.

But Is A Trip To Napoli Sotterranea Worth It?

As I said at the start of the article, I didn’t actually plan to visit Napoli Sotterranea; I just kind of stumbled over it, and was intrigued by the concept. But it ended up being my favourite thing I did in the whole of my trip.

I don’t want to tell you too much detail about what you’ll see on the tour; a good part of the delight of it is that it can be so unexpected – you’ll see things that’ll make you emit an interested “ohh!” – but if you’d like a sneaky peek, I’ve written about it in my account of my  trip to Naples. If you’re on the fence about whether or not you’d like to do the tour, I hope this gives you a gentle push towards taking it.

See also  Wellness and Travel - Is Arundel the Most Relaxing and Mindful Destination in Europe?

It’s also brilliant value for money: I rather lost track of time during the tour, because I enjoyed it so much that time just flew, but it was easily ninety minutes to two hours in length. For a paltry ten euros, and for the quality of the experience and what you’re seeing, it’s definitely worth it. Your guides also deserve a mention here, as they’re worth the entrance fee alone – very friendly, welcoming, and knowledgeable. Also, they’ll save your ass from getting hopelessly lost, and living like a hermit beneath the streets of Naples for the next ten years. I’m joking. I think.

But if like me, you’re a little anxious at the thought of descending into ancient tunnels in the ground, you can rest assured. It’s completely safe; don’t let worries dissuade you from visiting Napoli Sotterranea, because you really will be missing out.

So, Napoli Sotterranea gets a huge recommendation from me. It’s informative, it’s a great way to (quite literally) immerse yourself in the city’s history, and it’s an adventure. And that’s what travel is all about!

Check out Napoli Sotterranea’s website here or let me know in the comments if you’ve visited!

Prague In Winter: 18 Things to Do, and What to Pack!

Prague Souvenirs: 11 Awesome Gifts, and Where to Find Them

Travel Anxiety: How To Stop The Fear Of Terrorist Attacks

The 20 Most Instagrammable Places In Amsterdam