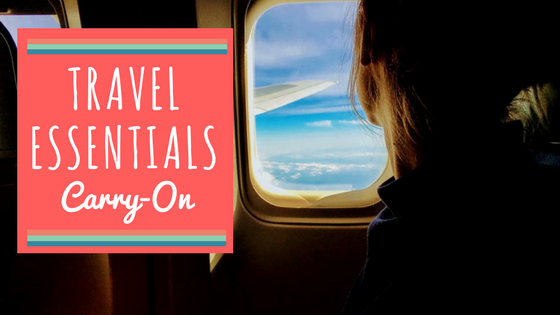 I travel to Italy in a week’s time!! Hurrah! I’m super excited about this, as I was meant to travel five months ago, but the trip was cancelled (not through my anxiety, for once. I was entirely innocent!). So I’ve been waiting for Five. Long. Months. Now, I’d be lying if I said that I had no anxiety at all, but on the whole I’m trying to use my own techniques and look forward to the good stuff, distracting myself with preparations.

And of course, one of the biggest preparations you face when travelling is packing. Suitcases can be fairly straightforward – you pretty much know what you’re going to take in terms of clothes, and everyone knows to remember their phone/camera charger. A lot of this stuff isn’t terribly crucial; in fact, a friend of mine says that at long as he has PMT, he’s happy. Passport, Money, Tickets, if you were wondering. All of those should go in your carry on. But what else should go in there?

Well, you’re asking the right person, because I’ve had five months to think about this!

Unless you haven’t travelled in quite some time, you’ll know that taking bottles of water through security gates at airports isn’t allowed, thanks to a security incident back in 2009. But did you know that there’s no prohibition on taking empty water bottles through security? You can save yourself a nice chunk of money (buying bottles of water after security, where you’re a captive audience, is notoriously expensive) by taking an empty water, then using a water fountain after passing through security. Can’t find a water fountain? Go to a restaurant or bar, and politely ask them if they could fill the bottle for you. You’re now ready to keep yourself hydrated during the flight, and save yourself even more money, as airlines generally charge even more for water than the airport does.

See also  How Travel Is Helping My Anxiety

I always keep a small pack of these for face and hands. Planes can be a bit grubby – the cleaning staff do a good job, but often they just don’t get the time during a turnaround to give everything a thorough wipeover. And you’d be horrified at some of the things that go on with the fold-down tables on a plane – I’ve known more than one person who’ve witnessed a baby’s diaper change occurring on one of those things. Wipe that sucker down, and do your hands too.

Also, for long flights, they’re great for your face, and having a nice freshen-up. This also works brilliantly with the next item…

It can get hot and unpleasantly sticky on flights. And the on-board air gets moistureless very quickly, meaning it’ll absorb any moisture it does find – that includes the moisture from your skin, leaving you feel drier than the airline-brand pretzels. So use the wipes, then double this up with a fan to feel a cool, refreshing breeze. I’ve always used a small battery-operated fan, but I’ve recently acquired a hand-crank one which not only keeps me cool, but keeps my hands and mind busy, and distracted from nervousness! You can pick up hand crank fans very cheaply on Amazon.

One of my most hated aspects of travel is having my ears pop. I can’t stand it. I once had a flight to Portugal when I had a particularly nasty cold, and the pain that went through my ears brought tears to my eyes (I wasn’t even crying; it was just sheer agony). So since then, I have always travelled with candy in my bag, and suck it to death during takeoff and landing. I haven’t found any other method which is half as effective, after much yawning and pulling on my ears! It’s also good to have something a bit minty, again for refreshment in the dry environment on the plane. You don’t want to arrive in Paris and go for that continental double-kiss with yucky breath. Non.

See also  Partying Abroad: How to Let Loose When You Think Your Anxiety is Necessary

Planes are hella noisy. And for fellow anxiety sufferers, the noise can be one of the worst aspects of flying – I myself have been guilty of listening to the engine noise, thinking “is that making a weird noise? Did the tone of that engine just change? WAIT, WHERE DID THE ENGINE NOISE GO, EEEEK!”. Save yourself this anxiety, and get yourself a good pair of headphones – you can listen to your music (an excellent way to pump yourself up for holiday excitement whilst blocking out other noises; don’t get caught singing La Isla Bonita out loud, though), or if you’d rather chill, consider investing in a pair of noise cancelling headphones. You know you’re going to be sitting in front of the fractious, tired toddler. Do yourself a favour.

For the anxiety sufferer, this is vital. And it’s just as important for everyone else to avoid being bored into grumpiness before you’ve even arrived. It can be a book, a laptop, a tablet, a Kindle, a notepad, a pack of cards, a colouring book. Just focus in, and zone out.

Most flights these days have the majority of people keeping themselves entertained via mobile phones (though don’t forget airplane mode!), whether it’s by a game, Kindle app, or doing a bit of language learning. If you think you’d also like to use your phone on the plane, consider putting your USB cable or charger plug in your carry on. A lot of planes have plug or USB sockets by the seats. You may find that there’s only one per row, in which case you might have to hope that no-one else wants to use it, but it’s a good opportunity to charge your phone while you use it, and arrive abroad with a fully-charged battery. And you can even check beforehand if you’re going to be in luck. Go on SeatGuru and look up your flight number. Hover over the seat you’re booked into, and you’ll be able to see whether there’s a power outlet there or not.

See also  The Very Best Things To Do In Capri, Italy - The Ultimate Guide!

If not, and this is something you may want to do anyway, get yourself a backup battery pack, again available from Amazon for various prices, depending on just how much storage you want. I have one which I keep with me pretty much all the time when I’m out and about, and I’ve lost count of how many times I’ve gotten carried away on my phone and got a bit too near to the red battery symbol. Plugging in with your USB cable and putting your phone on to airplane mode will charge it up again super quick, even if you’re nowhere near a power outlet. No more unusable phone, no more panic.

I hope these are helpful! Have you got any tips to share on carry on essentials? Pop them in the comments below! I’m off to pack my bags…

One Day in Naples – The City of the Sun

Prague Souvenirs: 11 Awesome Gifts, and Where to Find Them

Wellness and Travel – Is Arundel the Most Relaxing and Mindful Destination in Europe?