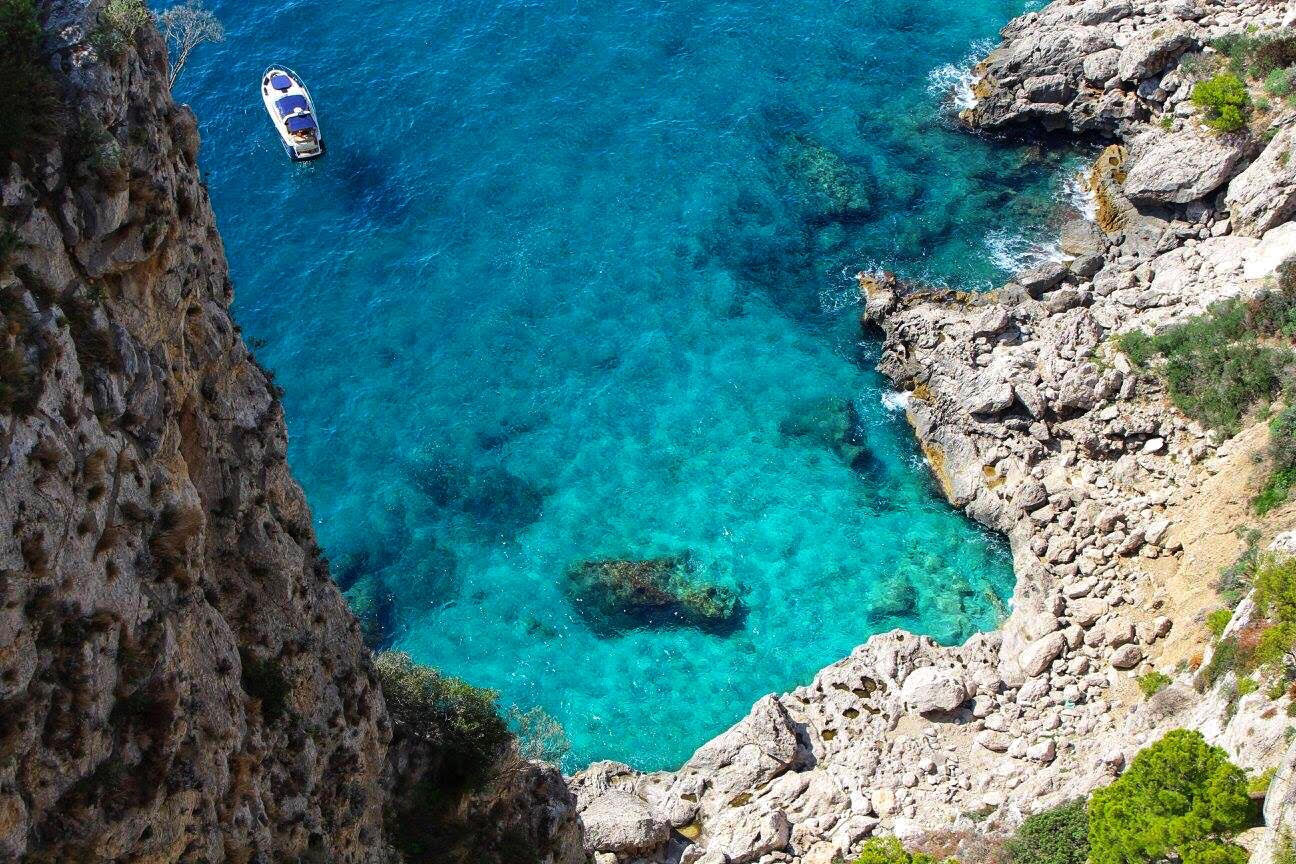 How To Get To Capri From Naples

Capri has been calling visitors with its oh-so-sweet siren song since Roman times – you can ask the Roman emperors Augustus and Tiberius, who had party pads there (well, you can’t actually ask them, since they’re hella dead, but you know what I mean). I certainly love it there, after three visits! But most modern-day travellers have a simple question in regards to this most beautiful of places: namely, how to get to Capri from Naples?

Want some more info on Capri? Check out the ultimate guide to things to do in Capri!

A trip to Capri is worth it just for views like these!

What are the options?

If you were thinking of driving there, bad news: Capri is an island in the Bay of Naples. So no road-tripping for you! Indeed, although car ferries do go to Capri, it’s forbidden to bring vehicles – that includes motorbikes – on to the island for most of the year (Easter to November). But to be honest, you really don’t need them – there’s only one road on the island, and it has an excellent bus service in operation. Leave the car parked up on the mainland, relax, and enjoy not having to navigate the highways and byways.

So unless you’re super-rich and contemplating travelling to the island by helicopter (and if you are, I’d like to state that I’m available for adoption, I’m very tidy, and I love animals and private yachts. Though my parents might have an issue with it), there’s only one way to get to Capri from Naples.

We’re going on a boat!

How to get to Capri from Naples by boat

First of all, if you’re not already in Naples, you’re going to have to get there (duh). So if you’re doing a bit of an Italian tour, your likely previous stop is going to be Rome, 225 kilometres away. You can fly it, with flights departing from Rome’s Fiumicino Airport, and it’ll take you about 50 minutes. But honestly, a much better option is to take the train – it only takes between 1-2 hours, depending on which service you get, so save yourself the hassle of airport security and jump on one of the high-speed Frecciarossa trains from Roma Termini. The price will vary depending on the time, but you’re probably looking at something in the region of €35. I have seen them as cheap as €12.65 though, so check the helpful Trainline website for an advance look.

See also  British Museum Tips: How To See The Highlights In Just One Day

So you’re in Naples! Awesome! Grab a pizza, and let’s see where you need to go now. Don’t worry, it’s really easy!

Knowing which port to depart from, and how to get there

Being the maritime centre that Naples is, both for cruise ships and industry, the city has two ports. So how do you know which one you need to go to Capri from Naples?

It’s a simple answer: you can go to either, but it depends how quickly you want to get there, and how much you want to spend.

Have a look at the timetables below – Molo Beverello has the faster ferries, but you’ll pay a little more for them. Calata Porta di Massa has the slower ships, but you can grab a bargain if you’re on a budget.

And because I’m a kind individual, I’m going to show you how to get to both of them!

If – like most people – you’re doing a day trip to Capri from Naples, you’re probably going to want to get there quickly. All the better for making the most out of your day! And if that’s the case, you’re going to want to depart from Molo Beverello port.

You can go there straight from the airport. Obviously you can get a taxi, but a far more economical way is to catch the Alibus shuttle bus. You can find it directly opposite the exit to the airport; leave through the arrivals lounge doors, and you’ll see the bus stop ahead of you. They depart every 20-30 minutes, and cost €5; it’s a brilliant way to get into central Naples, and to the port specifically! It’ll drop you off just outside Molo Beverello.

If you’re already in Naples, the nearest Metro stop is Municipio – walk down Piazza Municipio towards the sea and the busy road (which you’ll have to cross). Take a right turn and walk down Via Ammiraglio Ferdinando Acton, and you’ll see Molo Beverello. You can’t miss the large advertising boards and departures board!

If you want to go directly to Calata Porta di Massa from the airport, then you’re in luck – the very same airport shuttle bus I told you about in the section above, also drops passengers off at Calata Porta di Massa! There’s really no better way (and certainly not a cheaper way) of getting there.

If you’re already in Naples, you’ll need a different Metro stop to Molo Beverello – further up the coast, Porta di Massa is better reached by alighting at the Università Metro stop. Walk down Via Marchese Campodisola, and cross over the main roads of Via Alcide de Gasperi and Via Nuova Marina – you’ll see the port just ahead of you.

When you get to the ticket office (biglietteria in Italian), choose the line which has your destination written over the top of the booth – don’t worry too much about which company name it has written there; you’re buying a ticket for the time, not the company. Make sure you’ve got cash on you, are credit cards aren’t always accepted.

Once you’ve got your ticket, you’ll see that it looks a bit like this:

Obviously this is my ticket from Sorrento to Ischia, but it’ll look exactly the same otherwise.

You can hardly fail to notice the massive time printed on the ticket – when you buy your ticket, you’ll be printed one for the next available sailing. If you buy a return ticket, it’ll have a return time – I’ve generally found that they give you more than enough time for a day trip to Capri, so a journey out at around 9am will usually see a return time of somewhere around 5pm.

However, for both outward and return journeys, I’ve found that the times printed on the tickets are not exactly hard rules. Being the generally laid-back types that they are (I’d be pretty chilled if I was sailing the Bay of Naples all day!), the ticket checkers on the ferries will quite often usher you on to their boat even if you have a ticket for a slightly earlier or later time, providing they have the room. If you’re travelling in the height of summer, it’s probably better to stick to the printed times; the hydrofoils in particular get super-busy.

Look for the destination and time you want – don’t worry about which ferry company’s name is on the booth.

See also  Krakow Itinerary: 26 Delightful Things to Do in Krakow!

There’s some awesome hikes on Capri – these steps are much better going downwards than upwards!

You have officially arrived in Capri – ain’t it pretty?! Admittedly, the buildings around the Marina Grande aren’t the most scenic, but they’re going to be pretty vital for your onward journey into the island.

If you’re visiting Anacapri, or any other location on the island that isn’t in walking distance of Capri Town, you’ll need to walk up the Marina Grande until you’re on the dockside, then take a right turn and walk until you come across the biglietteria. This will sell you tickets for the exceedingly efficient bus service – or, if  you’re feeling a bit flash, you can hire a convertible taxi for the ultimate in Italian glam. This is Capri, after all!

But for most people, especially if you’re on a day trip to Capri, you’ll want to take the funicular railway to Capri Town. You’ll see the entrance to it as you disembark from your boat and walk up towards the Marina’s buildings; it’s a large, cavernous arch with “Funicolare” helpfully written above. However! Don’t go scampering straight there; you’ll find yourself up against a ticket barrier, and out of luck. Instead, you need to go to that multipurpose biglietteria I mentioned above. Yup, they sell the funicular tickets as well as bus tickets: come back armed with one, pop it through the barrier’s scanner, and ascend up to the heaven that is Capri Town.

Curious about what you can do whilst you’re there? Have a look at my shopping guide to Capri, or my guide on what to do on Capri. Or you can check out my travel tales of my trip to Capri for a more personal experience, including faux movie stars and angry elderly ladies!

You’ll fall in love. Trust me on this one.

How to get to Capri from Naples – your questions answered!

Well, I hope that this article has told you everything you need on how to get to Capri from Naples! But if you’ve still got questions, pop them in the comments below, and I’ll see what I can do!

Most of all, enjoy your trip to Capri – it’s such a beautiful, relaxed place, which will have you falling in love with it the moment you get a glimpse of its tropical-esqe cliffs. The journey there is really simple, although potentially confusing at first, and you can sit back and enjoy skipping over the waves. Buon viaggio!

I hope you’ve enjoyed reading this article – if you did, please share it, or pin the below image to Pinterest!

Budapest to Bratislava Train: An Easy (and Awesome!) Day Trip!

Amsterdam – 5 Tips To Know Before You Visit

23 Things You Should Know Before Visiting the UK

Pre-Travel Anxiety - How To Make An Anti-Anxiety Kit

Pompeii or Herculaneum: Which Should You Visit?