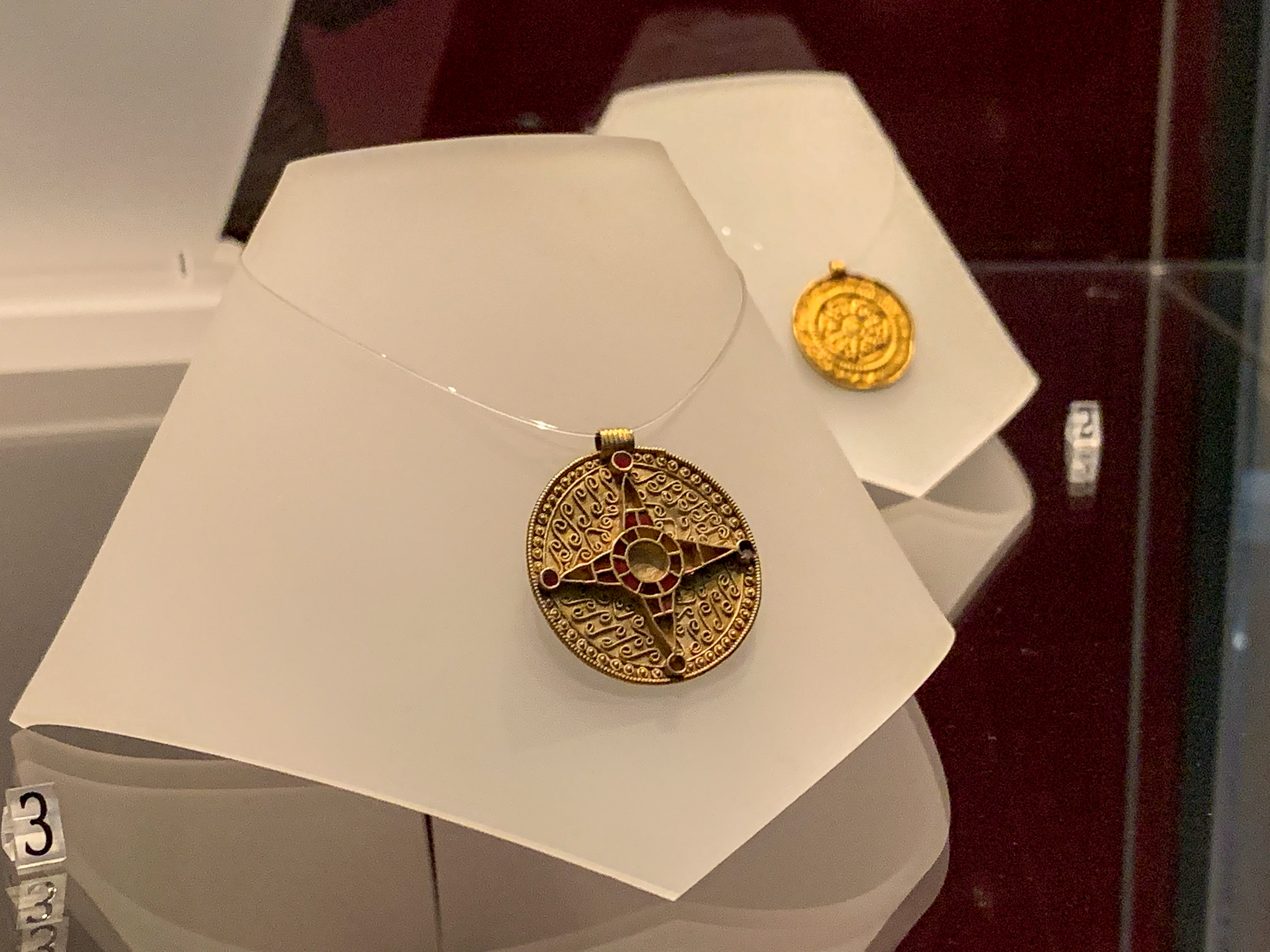 The Prittlewell Prince exhibition (or the Princely Burial, as it’s more accurately known these days) finds were discovered in 2003, and were immediately sent for study in London among much excitement from history nerds such as I. For reals: how often do you find a horde of 6th century goodies, perfectly preserved? Answer: not often!

In 2019, the finds returned back to the place they were found in, the English seaside town of Southend-on-Sea, for all to enjoy. Happily, for anyone visiting London who fancies seeing some seriously historic bling, it’s extremely easy to visit! It won’t even take up a whole day, and it’s completely free to enter!

So let’s look at what the Prittlewell Princely Burial is, our best guesses at who he was, and most importantly, swoon over the shiny things.

Where is the Prittlewell Princely Burial, and how do I get there?

If you’re in London, and you’re a museum fan, good news! It really couldn’t be simpler.

You can reach Southend-on-Sea via two main London train stations: Liverpool Street, and Fenchurch Street. Services from either are extremely frequent, and take about an hour.

If you’re catching the train from Liverpool Street, you’ll be looking for a train which has Southend Victoria listed as the destination – yep, it’s the last stop, so you can’t even miss getting off at the right place. Rejoice! And getting to the museum from Southend Victoria station couldn’t be simpler: the museum is quite literally next door. Take a right turn as you exit the station, turn right again, and you’ll see it straight in front of you.

If you prefer to travel from Fenchurch Street station, you’ll be looking for a train which is going to Shoeburyness, via Basildon (don’t catch a train going via Ockendon, unless you want to add some unnecessary journey time on). Alight at Southend Central station, and you’ll have to walk up the usually-busy main shopping street in order to reach the museum. You’ll generally be far better served by travelling from Liverpool Street.

See also  The Best Luxury Travel Gifts For Her: 10 Elegant Items That Every Girl Will Want!

Either way, you’ll arrive at Southend’s Central Museum. And you’ll have a date with a prince (not William or Harry; sorry about that). But was he a prince at all?

Who was the Prittlewell Prince?

When the Princely Burial finds were discovered in an area of Southend called Prittlewell, it immediately caused a wave of excitement to go through the English archeological scene. The reason was that it was clearly a high-status male who’d been buried there: although there wasn’t anything left of him but tooth enamel, the quality of the goods buried along with him made it clear that he’d clearly been quite well-off. It was fair enough to assume that this had been someone from a Saxon royal family – a prince, or even a king.

For quite some time, the Saxon king Saebert was the prime suspect, but after further investigation, it was discovered that the burial items were too early for it to be him – they’d already been in the burial mound at the time we know him to be alive. His father Sledd was also a possibility, as well as his uncle Seaxa, but the truth is that we’ll never know.

However, the name “The Prittlewell Prince” had already stuck, even though the new name of “The Princely Burial” is more accurate, thanks to the uncertainty over his identity. But more important were the items found in the burial site, discovered in the perhaps-unlikely setting of a strip of grass next to an Aldi supermarket.

(Who says that royalty don’t go to the supermarket like the rest of us?)

What items can you see at the Prittlewell Princely Burial?

Yup, here’s the fun bit: 6th century goodies! And very lovely goodies they are too: miraculously preserved despite being in the collapsed burial mound for centuries.

I won’t detail all of them – that would spoil the fun of your visit! – but here’s a few highlights.

These are teeny, yet significant. They were found where the Saxon’s face would’ve been, meaning that they’d been placed over his closed eyes (remember when Joffrey had the stones over his eyes in Game of Thrones? Same deal as here). They were probably held in place by a gold braid, and might be an indication that this was a very early Christian burial – in fact, it’d be the earliest one found in England. Of course, history is a fickle beast, and we’ll never know for sure – it might be that the individual was hedging his bets, and having elements of a Christian burial as well as the native pagan beliefs. But there’s no denying that these delicate foil crosses are exquisite, either way!

Not only can you look at the Princely Burial’s finds, you can also see the princely chap himself! Sort of.

This is all that remains of whoever ended up here: the enamel of his teeth. Although when you consider how old these are, it’s pretty impressive that they’ve survived at all! Alas, the samples are too small for any kind of DNA analysis, so they’re a bit of a dead end as far as potential information goes. Also, we can’t clone him, which would be a romantic comedy movie waiting to happen.

I must admit, these are my favourite items in the Princely Burial exhibition, because they’re so pretty – even with the bottles themselves having rotted away.

The bottles would’ve originally been made from maple wood, but the neck was decorated with a metallic rim which was embossed with an animal pattern. These survived, and are now one of the stars of the show!

Another of the stand-out items of the Princely Burial exhibition is the twin pair of blue glass beakers – these are both extremely rare, and would’ve been incredibly valuable at the time!

They’re a unique pair, and would’ve been made specially as goods for the deceased to take into the afterlife with him. That further suggests that the Saxon placed here was very rich and respected – you wouldn’t expect him to take anything but the very best with him! The fact that these glass beakers were found completely intact, after having had a mound of earth collapse on top of them, isn’t far short of miraculous.

For the true history nerd, the wooden items such as a shard of a painted box, and a completely intact wooden bucket are among the most exciting. Why? Because this kind of thing just. Does. Not. Survive.

Happily, these have! The fragment of painted box is actually the only piece of painted wood which has survived from Anglo-Saxon England. The bucket is even more impressive: it may look prehistoric, but being made from wood and iron (two materials which don’t stand the test of time terribly well!) means that it’s an impressive item indeed.

There’s a few gold items in the Princely Burial exhibition, including some gold coins which had travelled to the area from France, but the main attraction is a gold belt buckle.

This probably wasn’t used on a day-to-day basis, as it’s too fragile, but it would’ve played a part in ceremonial costume. It’s one of the finest and best-preserved Anglo-Saxon items in the country!

What else can I see at the museum?

Good news: quite a bit!

Although Central Museum is quite small, there’s plenty of other things to see. The Princely Burial exhibition is located just to the side of a new Archeology Gallery, which has items from the area in the prehistoric, Roman, and medieval eras (there’s even a selfie space where you can try on a Roman helmet, and do your best Russell Crowe impersonation).

On the other side of the museum, just past the exhibition of quite adorable toys and seaside attractions, there’s a space devoted to the London – a warship which mysteriously blew up in the Thames in 1665. The finds have been retrieved from the sands of the estuary, and now have their own exhibition; a huge cannon dominates the collection. Well worth checking out!

Share this guide to the Prittlewell Princely Burial Exhibition!

I hope that you’ve enjoyed this article! If you have, consider sharing it via the buttons below, or pinning this image to Pinterest!

Travel Rules – And Why You Should Ignore Them

The 22 Must-See Instagrammable Places in Florence!